Do you reckon that people will be more likely to click through to your print shop if the first thing people see on your site is “I have prints and you can can buy them here!” rather than “I never update my blog and you might be able to buy prints at some unspecified time in the future,” like it is now? Maybe do something about that, huh?

So yeah, dear reader, you can buy prints of Poe illustrations 1-6 and a number of postcard paintings on my Etsy shop which is HERE IN THIS LINK.

And it will help me keep the lights on.

Yuh-huh, all of those things.

1. I recently completed the illustration for Edgar Allan Poe’s ‘Alone’ – a beautiful little poem which forms the lyrics for a song on one of my favourite albums, Arcturus’ ‘La Masquerade Infernale’. It’s quite a departure from my metalhead days though, as it has a self-consciously childlike colour scheme with the primary red-yellow-blue palette. The way I read it, ‘Alone’ isn’t about being lonely, it’s about growing up as a romantic dreamer, learning to explore and find beauty in a world which doesn’t exactly make that easy. That person in the middle, the only black element, she’s alone, and she likes it that way.

Prints of ‘Alone’ will be available soon.

2. Not long after finishing Alone, which took aaages, I also finished another postcard which pays homage to my favourite landscape, the Peak District. I moved a little further away from it recently so I’ll need to go back soon, to check it’s still there. ‘The Slumbering Giant’ is my love letter to the hills and valleys of Yorkshire and Derbyshire.

3. What’s that? You sell prints now? Um… yeah, now that you mention it, I’ve been sayiong I’ll do that for a while now. They’re a thing. I have some. Quite a lot. Do you like prints? You can have some if you want. Yep, you can just have them. What’s that? What’s the catch? Oh yeah, you have to pay cos apparently that’s how you business these days.

Business my prints here: The Business End of a User Interface

Tomorrow I’ll be introducing Sheffield’s joint-second-worst poet of 2018 to the very scary world of Youtube. She’s a little nervous about it. Edgarella has previously performed at Sheffield and the Edinburgh Fringe’s anti-slam contests for bad poetry.

She writes about all the stuff that makes us both giddy, nervous, anxious, depressed and all those other emotions it’s no fun to talk about, and she does it in the most grandiose and pompous way possible. She performs in honour of the Bard of Baltimore, Edgar Allan Poe and worships Roger Corman, Vincent Price and Hammer Horror movies.

Sometimes I wonder if I should ask her to tone it down… but she gives me a look. A serious look.

Here are a pair of postcard illustrations. They aren’t painted yet. That may take a while. I’ve just moved flats and, well, everything takes a while when you’re balancing a whole bunch of variables. They will be dark. But at the moment, they are  pencil on card.  The former is a gribbly monster inspired by a ridiculous pun. The latter is… well, it’s mostly darkness, but you have to imagine the darkness for yourselves.

It is easy to imagine the darkness. 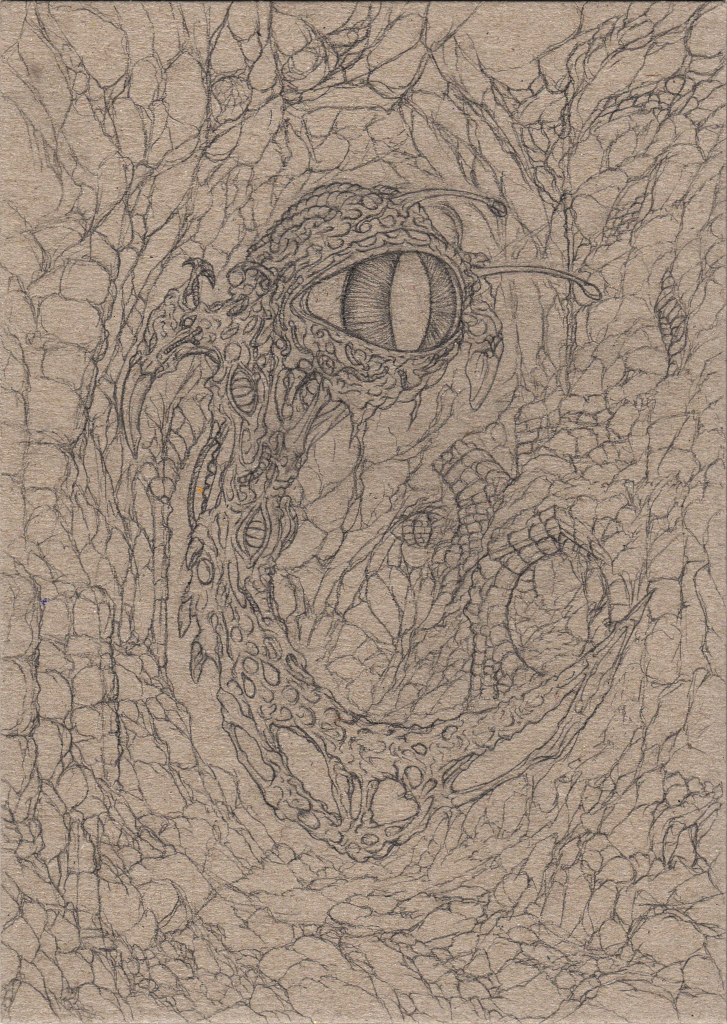 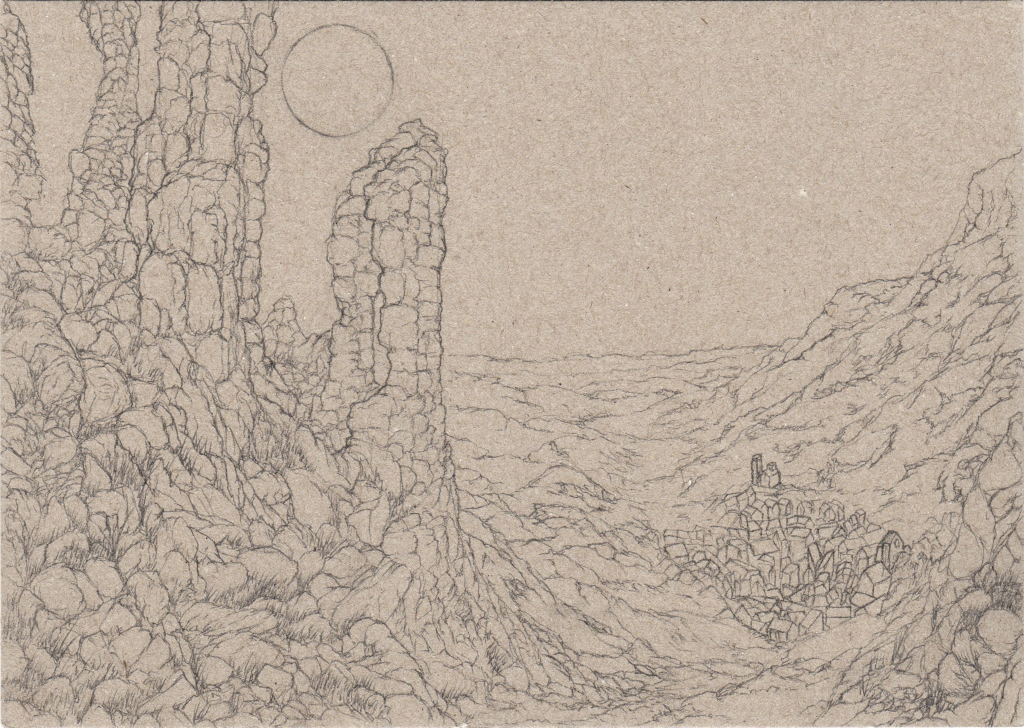 Here’s my newest completed postcard illustration, ‘The Green Thing’. Prints, as ever, eventually… 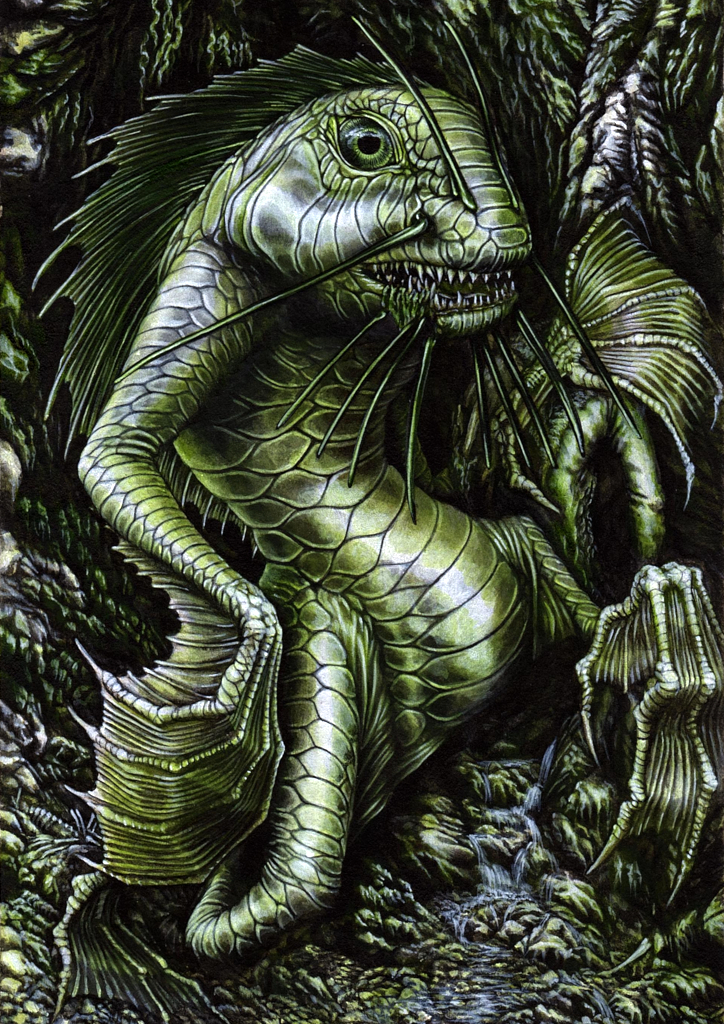 And a new postcard with completed pencil work, ‘Forest with Church Ruins’ which has a lazy title because I am a lazy artist.

It’s an arboreal barracuda. But that’s a gobful, so just call it a forest demon.

Here’s the newest addition to the Postcard series, inspired by the Sandworms of Beetlejuice, and various other terrors that dwell in the deep, dark woods. There may be a story behind this, if I can ever be bothered to write it.

I’m… er… also considering retiring the ‘Grindstone Art’ monicker, as it was originally a way to label my art without using my deadname. I’m more comfortable having that on work, so I might just start using the site that bears my proper name.

Not immediately, mind. But soon.

Dear reader, I would like to draw your attention to the new ‘Postcards’ page and the recently updated Poe gallery, now featuring deadly poison, tragic loss and a late night in the Briny Depths. Go look. Go on!

..three years since my last blog post. I am not good at this informing-the-people-of-the-things lark. Since my lat post, I’ve totally finished one album cover, which was a while ago, and finished an EP cover a couple of weeks ago, which is part of a much larger work whcih I’m not showing you yet cos it ain’t finished. Catch up with that by going to the shiny Hamerex page and having a gawp.

I’ve also been working on a bunch of illustrations based on Edgar Allan Poe stories and poems, starting with ‘The Masque of the Red Death’ in december 2015 and having just drawn ‘Ulalume’ in the last few weeks. Wearily wander over to this page for a look-see.

Also also, I’ve satrted working on a bunch of smaller illustrations of whatever I fancy, which might one day be sold as postcards or lil’ prints. Cute little gribbly monsters, aliens, landscapes and all sorts of this, that and the other. There isn’t a page for that, but there will be… soon.

Everything will happen soon. The scary part is what happens after.