Illustration based on Edgar Allan Poe’s ‘The Black Cat’ (1843), depicting the cruel narrator’s face-off with the supernatural Black Cat.

I made an effort to emphasise the man’s utter scorn for life, with an expression of fear and rage. These are essentially two demonic figures, one human and quite mundane in his inhumanity, the other with a cold intelligence suggesting much greater power, which makes the man’s fury impotent. The cat has absolute power.

A guilty man’s fear and rage reappear in a more recent drawing, ‘The Tell-Tale Heart’ – it is a popular theme in Poe’s revenge stories.

Note the numerous subtle references to mortality in the background. Look carefully, I won’t spoil them.

Buy this print on Etsy 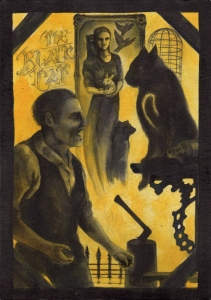 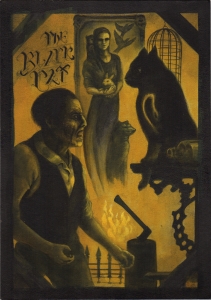 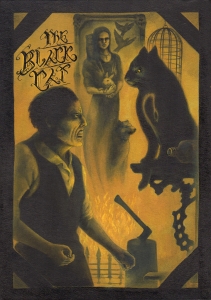