Here’s my first update on the old stuff I did before Grindstone Art was an actual thing: Hamerex’ first EP, ‘Into War,’ released in 2009. I was very excited about this as it was my first commissioned record cover. I used this in my portfolio when I was applying to Lincoln. I’ll write a little more about the process later, but for now, have a look. I’m still quite pleaed with this a few years on but I certainly learned a lot in the process & there are a few shortcomings that show now I might not have spotted Way Back When. 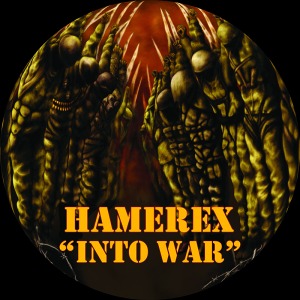