Turns out the Grindstone isn’t just for Metal, it has room for a bit of ‘punk, acoustic & spoken word’ too.A friend asked me to design a flyer for this gig, a fundraiser for Doris Banham Dog Rescue. I kept it simple for a number of reasons, mainly time constraints and to save on printer ink. 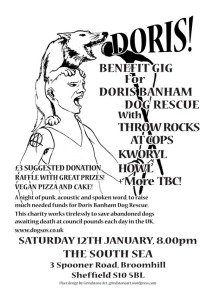 I first made some basic sketches to get the idea onto paper. I’ll admit I didn’t think too hard about the imagery, it’s a guy with a dog where his mohawk would be [incidentally, I decided whether to do a male or female character by flipping a coin. You may note a certain androgyny-bias to my work]. 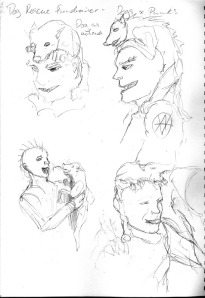 The drawing was first mapped out in pencil: 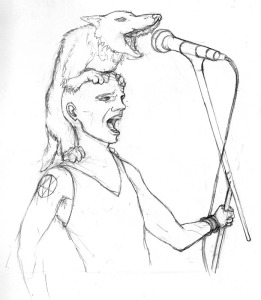 Then finished using black acrylic ink & steel-nibbed pen, with brushes for the larger black areas such as the mic stand. 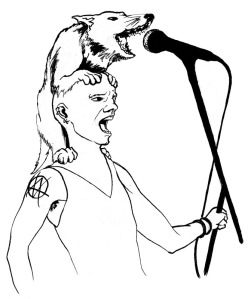 I then used InDesign to add & edit the flyer text. I tried using a bold sans-serif font (OldSansBlack) with a few modifications to make it as clear as possible, but decided it looked a bit too harsh & that a light-hearted serif font was more appropriate, so I went for NuevaSTD.

I’ll be at the gig on Saturday, it looks fun.

Printable .pdf copies of the flyer are available here: